August 23, 2015
For years, organizers dreamed of the first ever Mississippi Book Festival. Beginning at 9:00 am on Saturday, August, 22, 2015, that dream became a reality. Of course, they say that when the Mississippi legislature, Greg Iles, and John Grisham signed on to participate, corporate sponsorship followed and it was a done deal.

And despite the expected summer heat that continued to deal a blow to downtown Jackson, Mississippi, an estimated crowd of 2500 to 3500 ascended the halls and grounds of the early 1900s State Capitol Building, the location of the festival billed as “A Literary Lawn Party.” 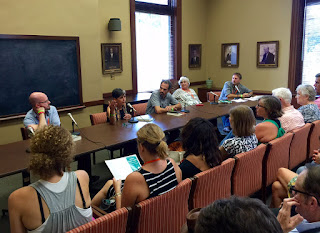 At this inaugural Mississippi Book Festival, it was also good to visit with some of my other author friends including Steve Yarbrough, Marshall Ramsey, Neil White, Robert St. John, Ralph Eubanks, and Curtis Wilkie.

I am grateful to Mississippi Book Festival organizer Holly Lange for my role in greeting and signing in other authors to the event. We all look forward to August 2016!